Why we eat organic

Anyone in my family will tell you that I can inhale a bag of cheetos faster than anyone they know and when I met my husband, his constant request for stirfry and veggies nearly un-nerved me.  I did not grow up in a house where we ate veggies or anything raw all that often.  I remember my mom making the prettiest salad and fruit trays for the occasional pot luck party or baby shower but it was not something we ate often.  My momma will probably faint when she reads this (she loves salad) but a love of healthy food was not taught to us.  I will say that my parents make everything from scratch, always have, and now eat more fruits and veggies than most people but our veggies consisted of bananas, avocados and shredded cabbage with diced up tomato salads (and we were not encouraged to eat the salad, that was pretty much the adults).

I absolutely love my momma and poppa’s cooking and anyone who has ever eaten there will agree but it did not equip me to marry someone who ate healthy food all the time.  Obviously, down the road somewhere I did learn : )  I did it because that is what he wanted not because it was “good” for us.
Fast forward to 2001, I am chugging along my journey of wife and motherhood with 5 little ones, eating mostly all from scratch food with some cold cereal in the morning and yogurt, granola bars and of course milk and eggs which were supposed to be “good” for us (it said so on the packaging).  One day my second oldest got a terrible stomach ache, which turned into a puke fest.  This started occuring daily,  then weekly, then a month passed and I was at my wits end.  I gave him things like oatmeal thinking it would be good and easy on his stomach, gatorade to put back all the liquids he was losing and the more things I tried the thinner he got and his face did not look like my robust little boy anymore.  The doctor would just dismiss me with the upset stomach B.R.A.T diet (bananas, rice, apples, toast).

Then one day, I woke up and sat in bed and it hit me.  Could he be allergic to something in the food, something that would not be there unless someone put it in there.  PRESERVATIVES!  Oh my goodness, could that be it.  If that was the case then it would be an easy fix, I will just go over my pantry and eliminate things with preservatives…. by now you can imagine my surprise when everything pretty much had preservatives in it.

At this point in my life I had never really worried about things like this.  I fed my kids from all the food groups, we ate very little candy and we are all ok.  This is also the time when two new things became part of our lives, the internet and a store called Wild Oats (now known as Whole Foods).  I began to read and read what little was out there.  I could not get enough information, I read every book I could find on the subject and scoured to magazines at the health food store.

I loved Wild Oats, it was full of so many foods I had never heard of and people who cared about where their food came from and even who grew it.  I moved my shopping day to Friday night when I could leave the smallest with Poppa and take the big kids shopping at Wild Oats, pretty exciting Friday night huh?  Why Friday nights? Because they always had a live jazz band.  The kids would help out by being quiet as I learned my way around the organic food world, with my trusty price notebook and calculator, writing down measurements and weights and prices by the ounce, buying a pack of cashews as opposed to buying from the bulk bins.  This was a new world for me, it was inspiring and fun. 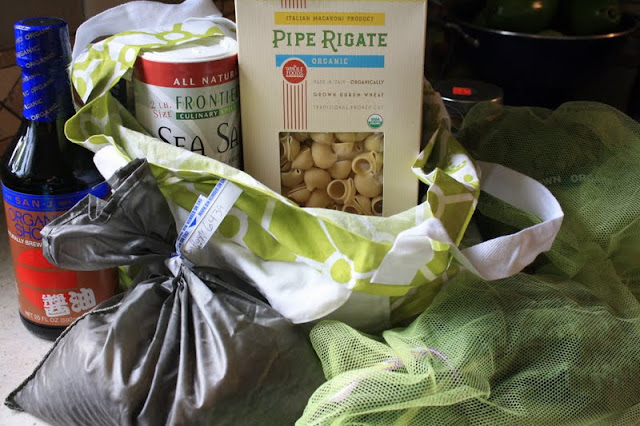 Within one week, that’s right I said one week, my sons symptoms pretty much dissapeared and he was starting to have energy enough to make messes and get into arguments with siblings.  Life was good.

Did I stop, no I kept reading and the more I read the more I had to read and the sadder I got.  The reason that our children (and us) were all of a sudden allergic to the very food we need to live is because in the 90’s our food was changed, things were added that were bad for us.  Some of them are actually listed as pesticides by the United States.  Genetically modified foods were introduced into our food system to increase profits of major agricultural companies and the big box stores sold it to all of us….and we ate it.  Some of us are still eating it.

I’m back, if anyone missed me.  As mentioned two posts ago (before I  dissapeared) we were planning on going camping in the Tennessee mountains.  I am back and promise to share some pictures once I get them all sorted out. I must say that I missed home (I am not big on going away too often) but I dearly miss the simplicity of living in a one room wood cabin with my family.  I guess maybe it would not be too romantic after a while but one week of living together and being outside all the time with almost no belongings has made me think how I need to simplify alot more.  It was so beautiful there and the super cold nights on the mountain top were amazing. But, I could not stay there because I live here so I am back and of course back means back to everything, farm chores, house cleaning, laundry, cooking… you get the picture.

I was in the process of making my favorite orange vinegar cleaner when I thought of sharing it with you. The van needed a good cleaning after a round trip from here to Tennessee total of 20 hours.  This spray cleans well and smells good.  Vinegar is a good cleaner but not too many people enjoy the scent (me included) so here is how I make my own orange cleaner for about $1.00.

Whenever we eat citrus here, the peels always have a second use. Organic produce is pricey so I try to not waste anything I can get another use from.  Lemons and limes get zested and I dry or freeze the zest for desserts, cooking and liquer making.  Oranges, tangerines and grapefruit are a favorite here in marmalade or candied peels but I have another use, orange vinegar cleaner.

When I am getting low on cleaner, I peel as much of the citrus pulp off leaving only the white under the orange peel and I add them to a big mason jar full of white vinegar.  I’m not talking about organic vinegar here (though you may use it if you like) I use the cheapo white viengar you can buy in a big jug. 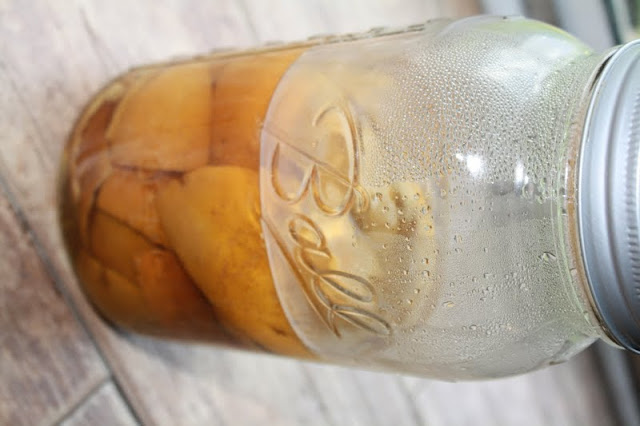 just plop the pieces of orange or citrus peel into your jar, put the lid back on the jar and shove it back into the back of your pantry until you have more to add, no waste : ) 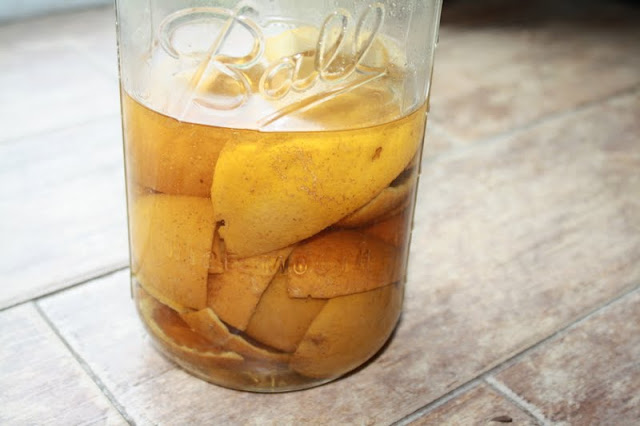 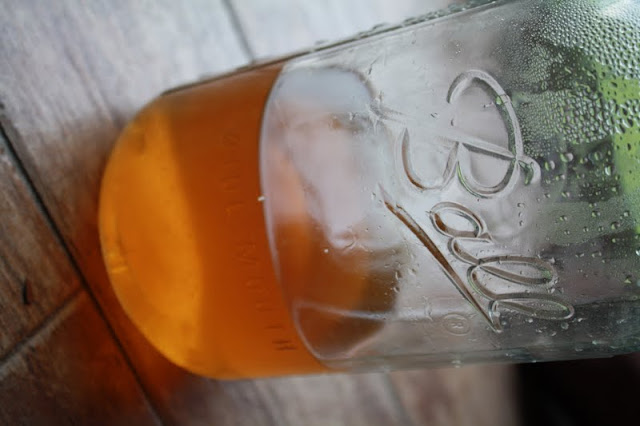 to this you can add water for a simple and gentle cleaner but I use mine straight to clean all mirrors, windows and glass and it is nice in the bathrooms for my little cleaning helpers to use. Just like Dr Bronners, our cleaner for everything)  if they spray it on themselves there is nothing to worry about. 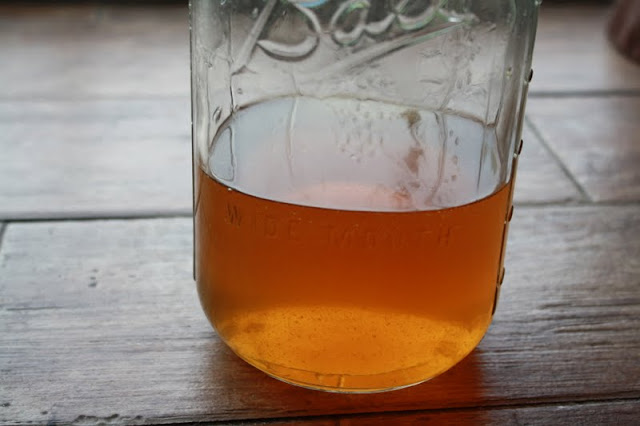 pour into your spray bottle (note to self, look for metal or glass spray bottles instead of yucky plastic).  Does that even exist?  If it does somebody let me know, its on my list of things to get rid of from our lives. 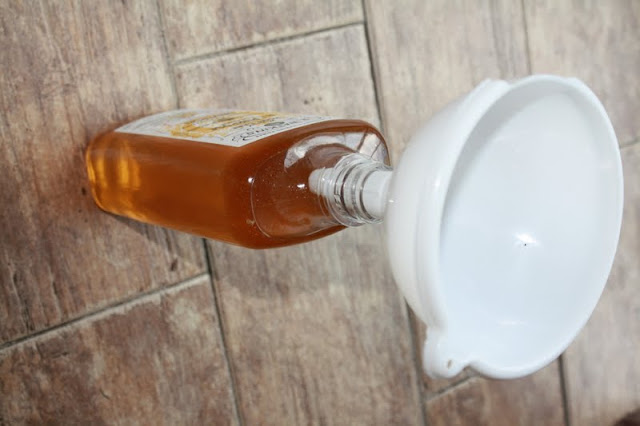 I promise this will smell like citrus and cleans well.  I may add cloves to my spray during the holidays…. or now.  I love the smell of orange and cloves.